A brief history lesson about Hats for Sailors.  Our first year was 2010 and Lynne had planned for it to only be one year and she took pictures but it was of boxes overflowing with hats.  If you want to read what she wrote at the time, you can here on Shanti's blog.  I read about Lynne's project on another blog and emailed her for her address.  We discovered we only lived a few miles apart and I volunteered to help sort and pack.  It was such a great idea and we wanted it to continue.  Lynne is such a busy and amazing woman that she needed some help with the logistical details to make it work.  I was happy to help out.

In 2011 it was Lynne's idea to take a picture of all of the hats together.  I was able to display them on top of my bedspread and get a picture.

In 2012, it took the floor of an entire room!  By 2014, I was precariously perched on top of a ladder trying to fit all of the hats in one picture.

This year, I wanted to make some changes.  I didn't think the pictures did the gorgeous hats justice.  And maybe I don't like perching on a ladder.  I had several ideas.

First, I thought I would lay them out on a staircase.  I started to do it and thought that bare stairs with slippery wool hats was probably not any better than being perched on a ladder.  I placed hats on the bottom step, did some calculations and knew they would never fit!

I had another idea.  I live in California and we have recently had some badly needed rain so I had to wait for all the dampness to dry out.  I was cutting it close because the hats need to get in the mail in the next few days to make it to the ship before Christmas (ship announcement to follow soon).  Fortunately, the skies cleared, the grass dried and the sun came out.  Here are a few pictures of your gorgeous hats!  I like these much better than last years and I didn't have to perch anywhere that made me nervous. 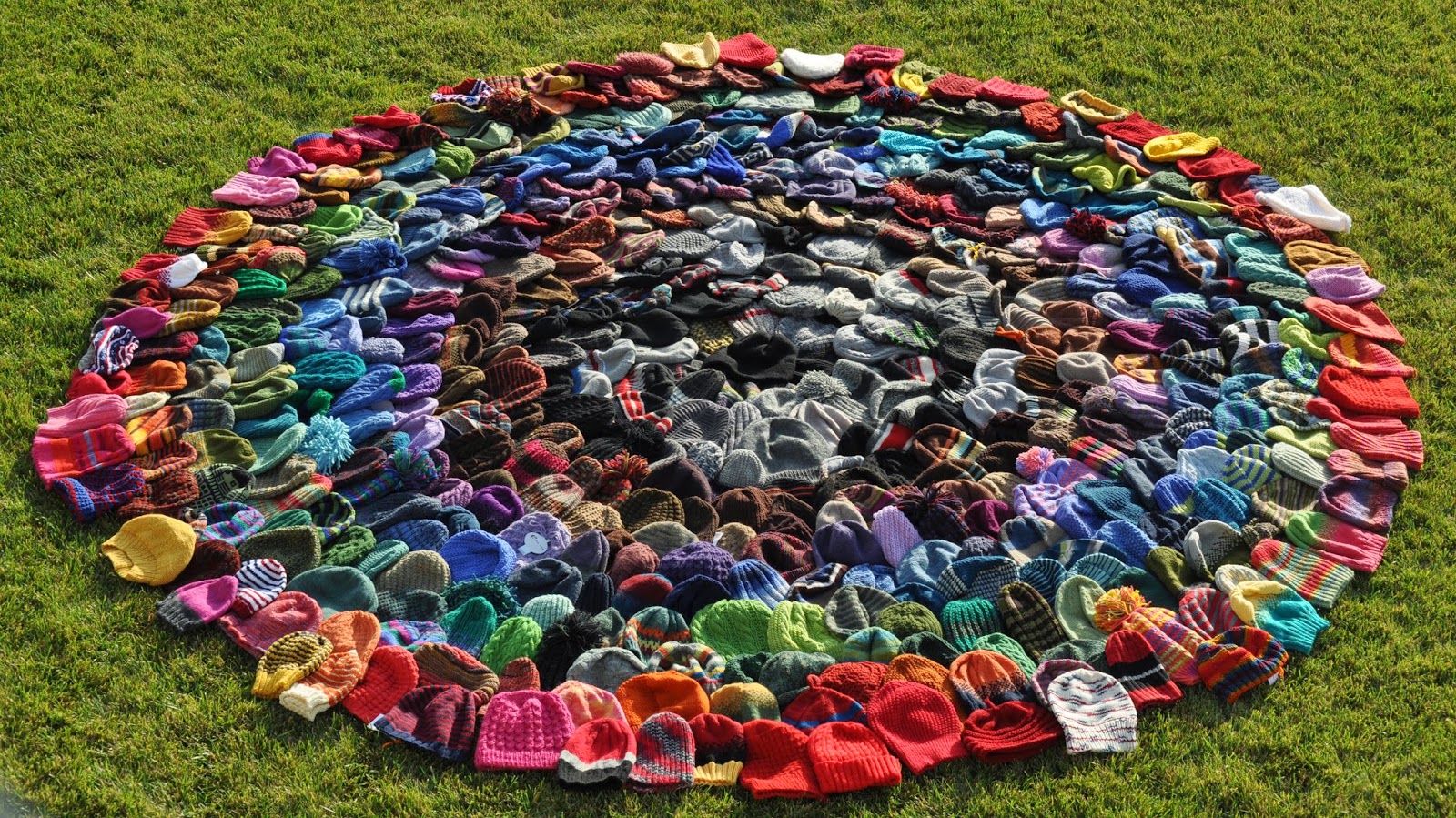 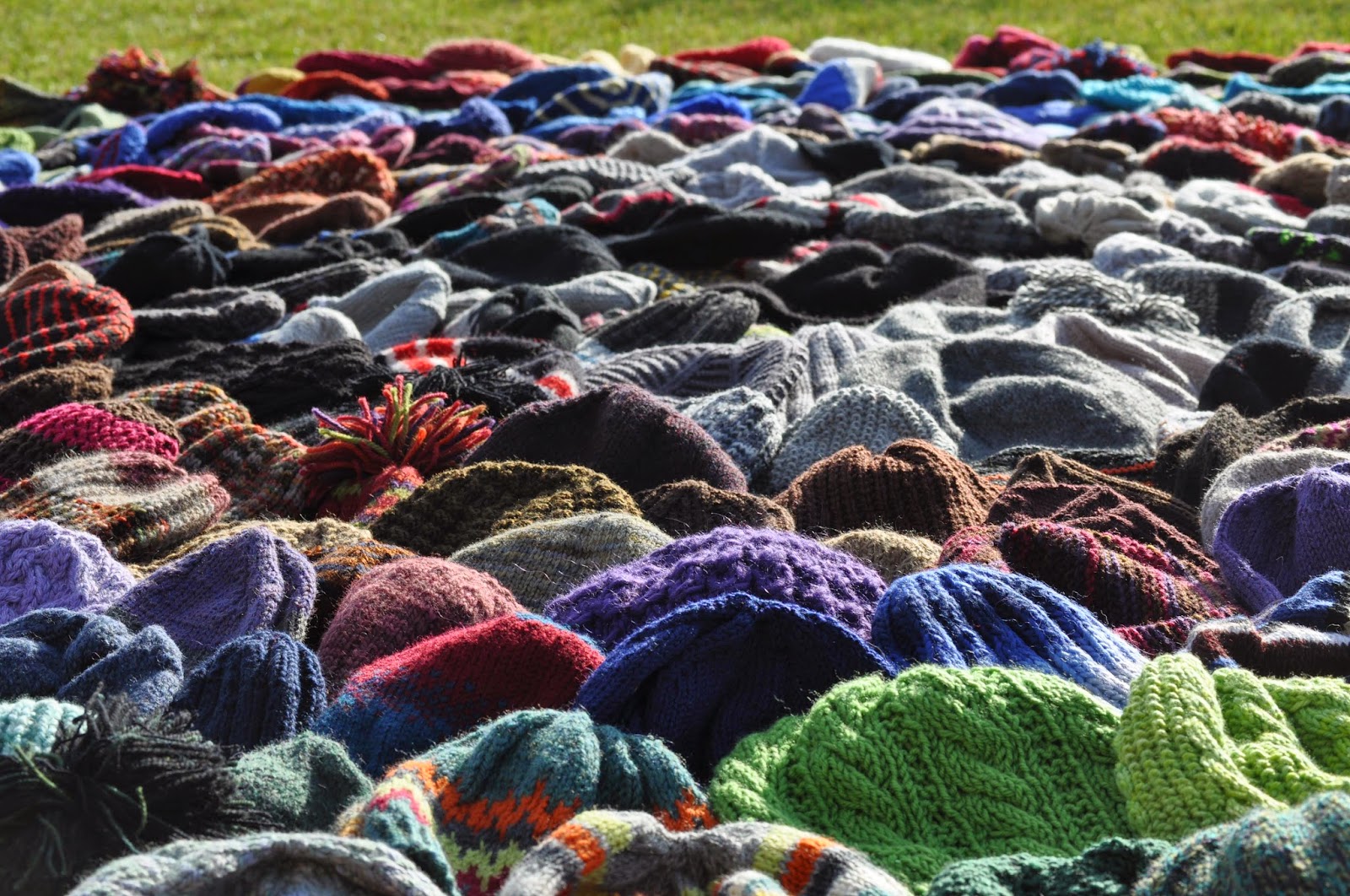 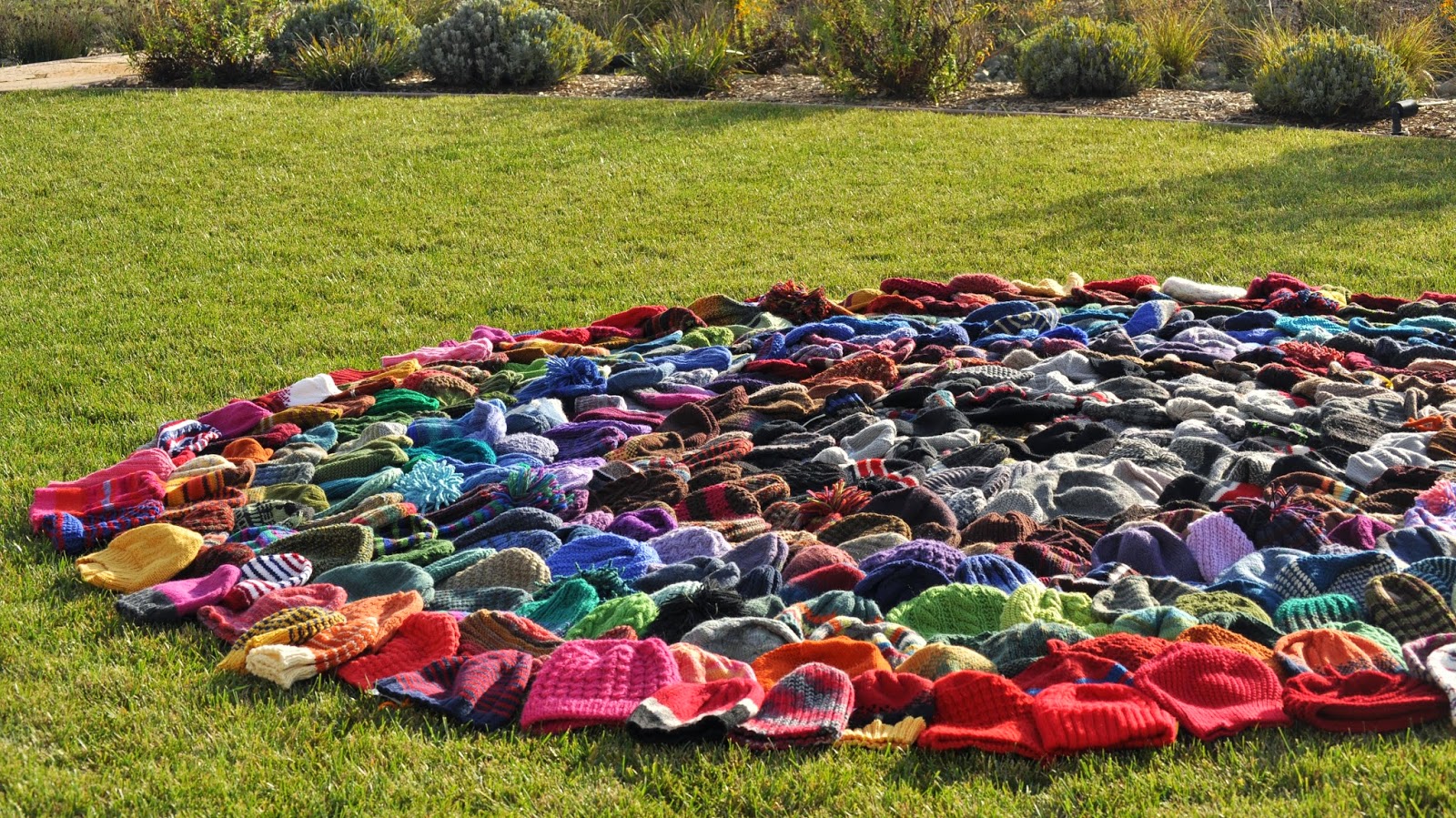 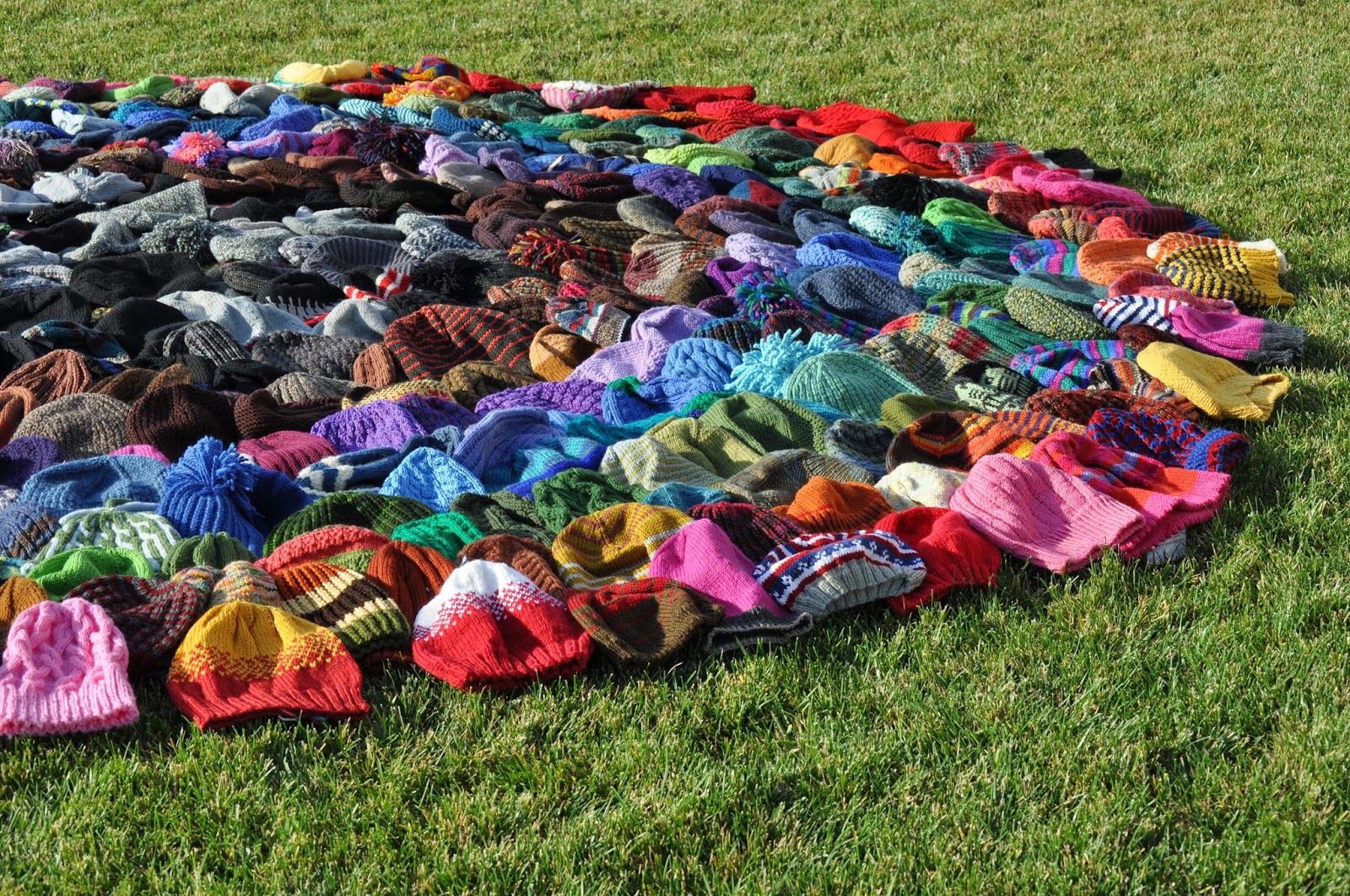 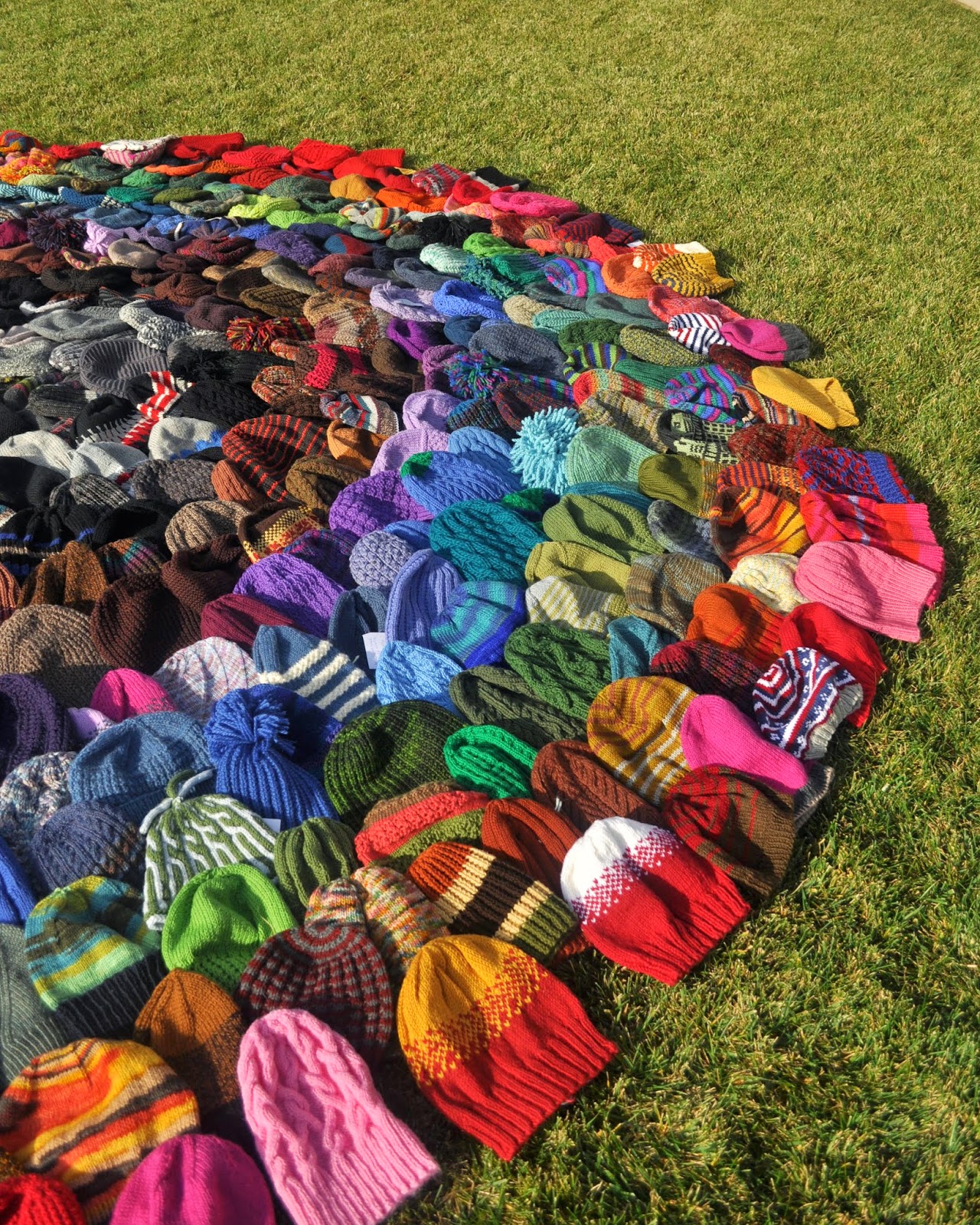 There are more photos on our Facebook page.
Posted by Hats for Sailors at 4:30 PM No comments: 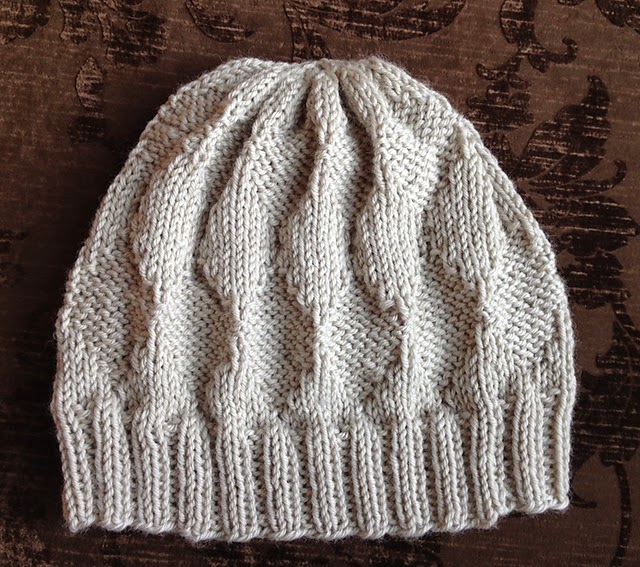 #100 is Fair Winds and Following Seas Beanie designed for Hats for Sailors by Deb Buckingham and is this month's KAL on Ravelry.  It seemed appropriate for the finale.  I knitted 100 hats from 100 different patterns in less than 100 weeks.  I am very glad I did.  I found great patterns that I really love.  I learned a lot that I don't think I could have learned any other way.  I am a rule follower and that makes me more inclined to knit anything strictly to the pattern.  Even when my mind is telling me this won't turn out well, I just keep plugging along.  It is challenging for me to knit outside the lines.  I should probably say "was challenging" because it has made me far more willing to be creative.

Knitting all these patterns has made me realize that there are some generalizations to hat knitting.  I wrote about them in this posting.  I would add one more item to the list.  I now always cast on one extra stitch.  After I knit the first stitch in the first round, I pass the last cast on stitch over that first knit stitch.  I think it makes for a more even brim.

I also realized that there is so much possibility within those guidelines.  I knitted a lot of plain, simple patterns and even they had a lot of variation.  There are so many different ways to make a brim or decrease for the crown.  And then there is the body of the hat which is absolutely overflowing with possibilities!  I plan on using this knowledge and newly found creativity for good for HFS in 2015.

Would I do it again?  Absolutely!!!  It was a great learning experience.  Hats are small and a great laboratory for knitting experimentation.  How wonderful it is that I can experiment AND provide a hat to keep a Sailor's head warm.

That said, I think I learned everything I needed to learn somewhere around Hat #67.  I am so happy to have knitting freedom again!  What do I do with that freedom?  I'm not sure but I probably should start thinking about my Christmas knitting...
Posted by Hats for Sailors at 10:26 AM 2 comments: 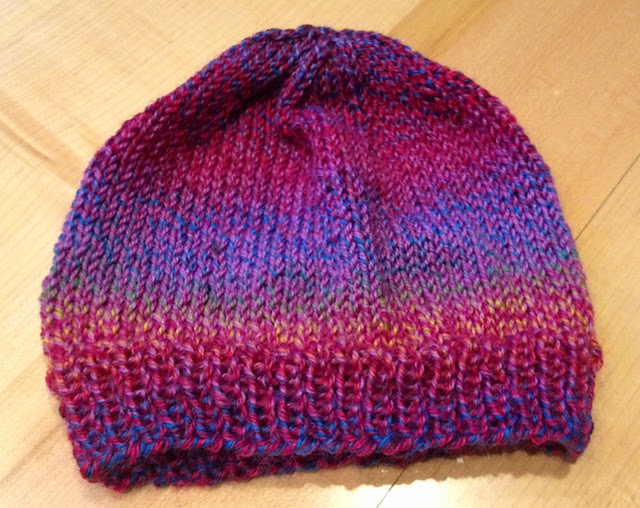 Posted by Hats for Sailors at 6:58 AM No comments: 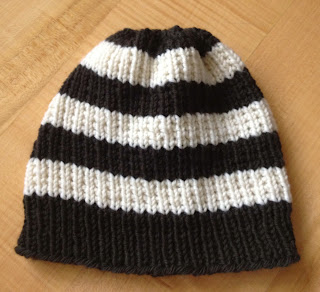 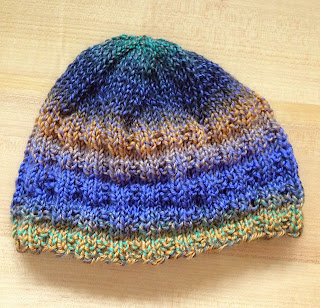 I have all three of the last hats on needles.  One is just cast on and I haven't even finished the first round, but it feels really good.  I will be glad to finish, but I will also be really happy to go back to some of the patterns I enjoyed.  I'm still hoping to finish by Friday.  The one hat on #6 needles may slow me down a bit but I will be close.
Posted by Hats for Sailors at 12:38 PM No comments:

One of our members dyed yarn for a hat using KoolAid.  I loved the way it looked.  I have a lot of white yarn in my stash and I never knit hats from it because I always think it may not be the best color for a Sailor.  I decided to experiment and dyed this yarn using two colors of KoolAid.  I really like the color. 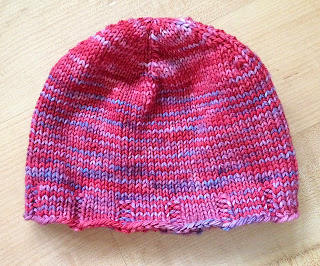 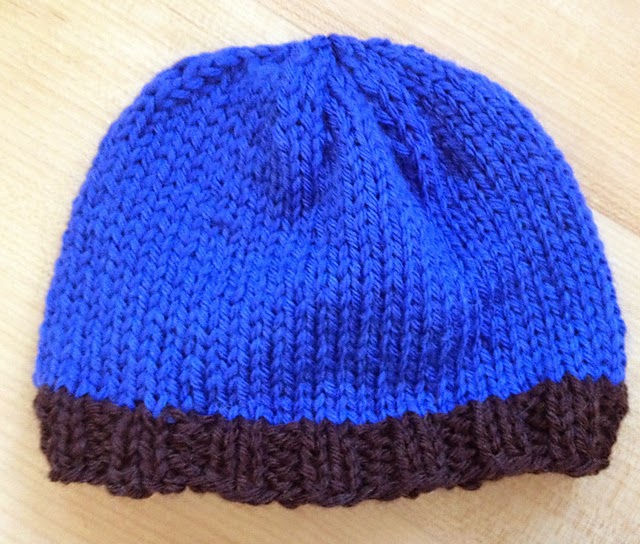 I was able to squeeze one more out of the Ella Rae Chunky Superwash that I had in my stash.  All chunky yarn is gone now so I am down to Aran weight yarns.  I have already planned out the next 5 and 4 of them are from Aran weight and one is worsted weight.  I am hoping I can finish one per day and have them all done by Friday.  I can't wait to get to other knitting and that is keeping me motivated.  I would also be happy to have finished 100 hats from 100 different patterns in less than 100 weeks.
Posted by Hats for Sailors at 7:06 AM No comments:

You can also visit us at: